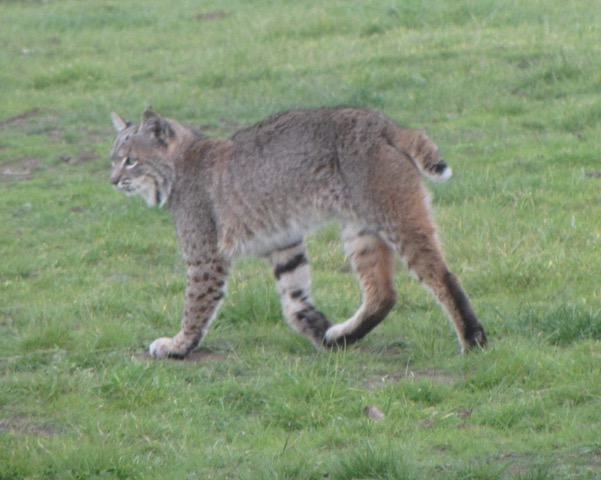 There was a bobcat trail across the sand the other day, a slow steady stride, a walking pace, laid down before dawn when the surface of the sand was wet with dew. After the day warmed up and the sand dried, the wet surface had turned into a thin crust that held its integrity late into the day. The tracks were typically feline: very round and neat without a lot of action and blowout, the result of an animal who walks carefully, using silence and stealth as its primary hunting and safety tools. The interesting thing was that now, about 11 a.m., although the dry surrounding sand was too loose to hold any fine detail and the paper-thin crust would crumble at the slightest touch, these bobcat tracks still had a crust inside the tracks. Each track still held very exact toe and pad detail—it had pressed the damp surface sand into the walls of its tracks, where they dried in that exact shape and were protected from the degradation of mid-day sun and wind.

Understanding this trail and its story involved an awareness of recent weather history, knowledge of the usual bobcat rhythms in the area, and details of that specific location that could add up to a very accurate estimate of when the tracks were made and what the cat was doing. The slow, steady pattern indicated that she had probably already eaten her fill and was heading home along a familiar route in the heart of her established territory, without much fear or curiosity.

These qualities of substrate conditions and timing relate to why mouse tracks can be so detailed when there is little else to see in dry sand surfaces. During the nighttime foraging journeys, their little toes and pads make precise impressions which are preserved in that fine crust when the sand dries. In downwind areas such as the Abbott’s Lagoon basin, the surface sand can be so fine-grained that it can hold the imprint of a single mouse toenail. The breakdown of just a few grains of the sand can obliterate these tiny details, but the general pattern of their busy nighttime foraging trails, the smatterings of little speckles in paths from one bush to another, can remain for days.

I have spent many hours looking at nothing but deer mouse tracks, prying open the mysteries of their activities and rhythms, even counting the number of specific tracks to determine how many trips it took to create their little highways of tracks. Their normal way of traveling, their baseline gait, is a bound, eight inch-long leaps, the four feet landing in a small trapezoid shape. This is an exact miniature version of the twelve to fifteen foot-long bound pattern of a mountain lion in a hunting chase! Four legged creatures have mechanical similarities of movement no matter what size they are.

In both of these cases, the trapezoid shape is created in each leap when the front feet land together and then the back feet pass around and land just in front of them, resulting in a wider pair of tracks just beyond the front feet tracks.  (DIAGRAM)  These patterns shift and change according to the conditions of the landscape and the intentions of the animal. Each animal has adapted a particular dominant style of movement and any shift out of this baseline pattern can reveal a great deal of information about the animal at the moment it passed by. The interactions of landscape, weather, movement, and purpose create infinite variations, which become a rich document to read.

Going back to the bobcat, its baseline gait is a walk, steady and careful, leaving tracks in a diagonal pattern, alternating left and right. But the bobcat often walks with a slight variation: its long back legs carry its rear feet a few inches past where the front foot had stepped, in an “overstep”, leaving a trail of paired tracks, two right, then two left. (DIAGRAM) This is the gait it will use when it is relaxed and confident. These are the things a tracker learns to read and that cause the book of nature to spring to life.

Though certainly rooted in nature, tracking also reaches into the roots of human consciousness. I have read some tracking experts, such as Louis Lieberman, who worked with native trackers in South Africa, claim that tracking and track forms were the beginning of written language as primitive humans began to communicate symbolically about the animals around them. The tracks themselves may have been the original forms or models for written words and letters.

Tom Brown, the noted tracker who inherited the Apache tracking tradition, once showed me an ancient deer skin, at least 500 years old, that his mentor had passed on to him, with symbols written on it by the old Apaches. It was a sort of shorthand, pictographic language depicting detailed information about deer and other animals, a way of communicating knowledge vital to keeping people fed and safe.

Looking at the stars tonight, I could imagine proto-humans looking at this night sky a couple of million years ago, and their developing minds beginning to organize the starry patterns into identifiable and nameable constellations. Pattern recognition is a critical and primal part of how the human mind works, an essential tool to organize the infinite amount of information our senses gather, and to provide a way to communicate about it. Tracking may be nearly as old as the human brain, an essential part of our hard-wired survival skill-set. When I am tracking, I can feel these ancient roots connecting me to something that is far deeper than modern concepts of living and culture.

The patience and inner stillness required to tease answers out of the constant mysteries in which nature coyly wraps herself is something I bring home and remember to use when I’m having a discouraging week and running into too many obstacles in my path. Tracking has taught me to keep observing instead of seeking immediate answers when I confront a mystery. It has taught me how to stop, stand back, and take a deep breath the moment I begin to feel confused, rushed, or pressured, and then continue asking questions! This is how nature immersion, and animal tracking in particular can actually become a spiritual path. Nature can be our greatest teacher if we only let it. The lessons it teaches are the oldest lessons, far older than modern religious concepts, and as such they can be the healthiest lessons too.

Learning to back off in the face of pressure or doubt creates the space in which deeper answers can emerge–and they do, in surprising ways. Each year that I have tracked has broadened my understanding of the patterns of life around me and has deepened my understanding of my own rhythms. This is where the beauty and magic of tracking reside. Without fail, shifting into this way of moving through nature (and our own world) will elicit amazing new experiences and insights, giving a deep glimpse into the intricate interwoven life hidden just under that surface crust. Every walk can become a magical journey if we learn how to let it.

Each time I track an animal I become that animal for a short while. I can feel how it feels, how it moves and responds, how it fits into the world. I can view life through its eyes for a moment and step on the ground through its feet. This builds a great sense of empathy for every creature, a deep sense of brotherhood and familiarity, a bond that is not easily broken.

That bobcat has become a true friend, elusive for sure, seldom seen, but someone who I deeply respect. She makes me mind my manners and pay attention to the disturbances I can cause. She teaches me to walk lightly upon the earth. She and her ancestors have been here far, far longer than we humans and have so much to teach us.

Have an inquiry about the Point Reyes Tracking School?